The world’s population is desperate for tools to fight this devastating pan- demic. The battle against COVID-19 has pushed research of hemp’s more than 500 compounds into overdrive. You might have seen the news about recent CBGa, CBDa, and CBD studies involving immune support. Experts are optimistic these cannabinoids can play a pivotal role in the battle against the 2019 coronavirus. However, there’s some confusion about the differenc- es between the compounds consumers need to understand.

CBDa is cannabidiolic acid. Before you get CBD, you have CBDa, which is also a cannabinoid before the decarboxylation process. Like CBGa, CBDa has advantages.

WHAT ARE THE BENEFITS OF CBDA?

CBDa shares many characteristics with CBD. Unfortunately, researchers know much less about CBDa than CBD. It’s one of the most understudied compounds found in hemp. Here’s what we do know:

CBDA MAY INHIBIT VOMITING AND NAUSEA

CBDA AS AN ANTI-INFLAMMATORY

There is a lot of research about how CBDa reduces

anti-inflammatory properties that could be useful in treating acute or chronic pain and other conditions affected by inflamma- tion.

For example, it may be helpful for IBD and Crohn’s disease, which is an inflammatory bowel disorder. Studies using oral administration of CBDa in rodents found it could reduce discomfort, providing hope for future clinical studies. 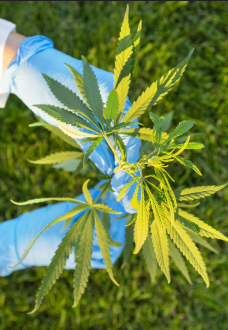 A study through the University of Chicago using lung cells found CBD may inhibit infection. When researchers tested CBD’s effectiveness, they found it decreased the amount of RNA produced when COVID-19 infected cells. The researchers believe CBD was not preventing the virus from infecting the cells but instead was effective when the cells were already infected.

We just wanted to know if CBD would affect the immune system … No one in their right mind would have ever thought that it blocked viral replication, but that’s what it did.

While this research is promising, it’s only the beginning. The researchers

recommend a clinical study to see if CBD and the other compounds work the same way in humans.

Though more research is needed, many researchers agree that CBDa and CBDa-rich hemp extracts may promote a healthy immune system. Howev- er, before you head to your favorite brand’s website, remember that these findings don’t mean that a daily dose of CBD or a fullspectrum CBD oil can treat COVID-19 or similar viruses. There’s a long way to go before we can say that for sure.

That being said, if you are concerned about your overall wellness other types of viruses, a daily CBD dose may promote healthy ECS function, which may help bolster your immune system.

CBGa is cannabigerolic acid and is often referred to as the “mother of all can- nabinoids.” It’s the first phytocannabinoid to form in the hemp’s trichomes. The tiny mushroom-like growths covering the leaves, flowers, and stems contain all 500 plus compounds produced by the popular plant.

As hemp grows and matures, the CBGa slowly converts to CBDa, THCa, CBCa, and the other phytocannabinoids. We have limited research because hemp flower contains less than 1% of CBGa.

WHAT ARE THE BENEFITS OF CBGA?

Many people think you must heat cannabinoids to benefit from them. How- ever, raw CBGa has wellness advantages as well. For example, it has anti-in- flammatory properties, which is about more than sore muscles. Inflammation plays a role in heart disease, cancer, Alzheimer’s, rheumatoid arthritis, in- flammatory bowel disease (IBD), and many other conditions.

It also has antioxidant properties. Your body’s antioxidant enzymes fight free radicals to reduce the risk of cancer and cardiovascular disease.

Some of CBGa’s other benefits include:

CBGa may play a significant role in metabolic disorders. CBGa is involved in regulating glucose and lipid metabolism, which contributes to the de- velopment of diabetes and dyslipidemia (high levels of cholesterol and triglycerides). This may reduce excess lipid accumulation, a process that contributes to cardiovascular disease.

Some experts believe there may be a role for CBGa boosting the immune system to reach its full potential. A new study from researchers at Oregon State University found some interesting results regarding certain hemp compounds and the virus that causes COVID-19.

Breeman believes the study shows promise that there’s another tool to fight the virus. He told NBC Right Now,

”In humans, they might be able to resist becoming sick if exposed to some- one else who has the covid infection … I think that might be the best ap- plication of our discovery, in helping people stay well.”

noid system (ECS). At one point, it was thought that you needed to activate the cannabinoids for them to interact with the ECS. However, researchers now know these non-psychoactive compounds still communicate with CB1 and CB2 receptors to enhance your ECS function.

CBD VS. CBGA AND CBDA

CBD is the result of heating CBDa to a specific temperature. While it holds many of the same benefits as CBDa, current research shows CBDa is the three most potent and bountiful compounds. However, that doesn’t mean you should ignore CBD or CBGa. It just means you need to understand the research behind all three so you can make.

CAN ANY CBD PRODUCT WORK?

No. Not all CBD products are created equally. Many brands use ethanol, which strips out the hemp’s beneficial com- pounds. Ethanol is a harsh solvent that destroys many of the plant’s trichomes, cannabinoids, terpenes, flavonoids, and other beneficial compounds.

Our proprietary process uses carbon dioxide (CO2) under high pressure and extremely low temperatures to pre- serve all the active components of hemp’s more than 500 compounds. The Innovative Synergistically Present Molecular Preservation (ISPMP) process captures all the naturally-occurring elements of hemp without the need for harsh solvents. It merges the most synergistic compounds to bolster the positive effects of each.

The preservation means you don’t lose the precious minor cannabinoids and rich terpene profiles from hemp. You can benefit from all the naturally occurring components that have been scientifically proven to have therapeutic effects without a high.

For the best results, you want a high-quality phytocannabinoid-rich hemp extract. Our extraction process offers a product with a complete profile of hemp’s beneficial compounds, including CBDa, which you won’t find in other brands’ full-spectrum hemp extracts.

Innovative CBD offers a unique, high-quality hemp tincture that’s made with the latest technology for preserving all of the naturally occurring compounds found in the popular, legal plant. Buy Innovative CBD tinctures and slow-dis- solving lozenges to experience the full benefits of hemp’s 500-plus compounds.